Patent Expiration Date:
Feb 8, 2021(US7157456),
Dec 11, 2020(US7585860 and US7592339)
Originator and Manufacturer:Bayer
Marketer in the US: Johnson & Johnson
Sales: $1.3 billion  (2013)
Rivaroxaban (BAY 59-7939) is an oral anticoagulant invented and manufactured by Bayer;[3][4] in a number of countries it is marketed as Xarelto.[1] In the United States, it is marketed by Janssen Pharmaceutica.[5] It is the first available orally active direct factor Xa inhibitor. Rivaroxaban is well absorbed from the gut and maximum inhibition of factor Xa occurs four hours after a dose. The effects last approximately 8–12 hours, but factor Xa activity does not return to normal within 24 hours so once-daily dosing is possible.

The drug compound having the adopted name "Rivaroxaban" has chemical name, 5-chloro-N-({(5S)-2-oxo-3-[4-(3-oxo-4-morpholinyl)phenyl]-l,3-oxazolidin-5- yljmethyl)-2-thiophenecarboxamide; and has the structural formula I, 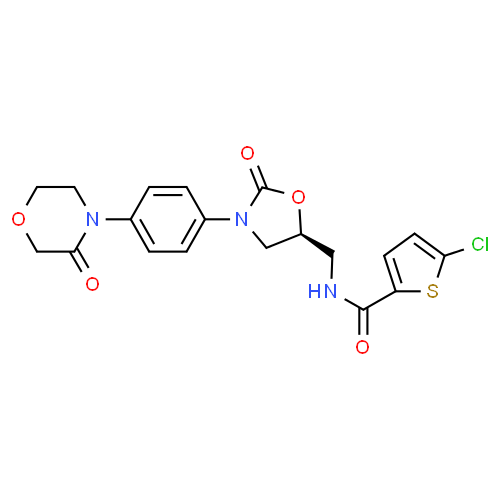 Chemical structures of linezolid (top) and rivaroxaban (bottom). The shared structure is shown in blue.
Rivaroxaban bears a striking structural similarity to the antibiotic linezolid: both drugs share the same oxazolidinone-derived core structure. Accordingly, rivaroxaban was studied for any possible antimicrobial effects and for the possibility of mitochondrial toxicity, which is a known complication of long-term linezolid use. Studies found that neither rivaroxaban nor its metabolites have any antibiotic effect against Gram-positive bacteria. As for mitochondrial toxicity, in vitro studies found the risk to be low 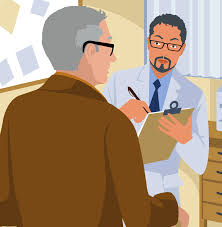 Rivaroxaban, chemically (S)-5-chloro-N-({2-oxo-3-[4-(3-oxomorpholin-4-yl)phenyl]-l,3- oxazolidin-5-yl}methyl)thiophene-2-carboxamide, described by formula (1), was developed by the company Bayer Healthcare (WO 01/47919, 2001). Rivaroxaban is applied in the clinical practice as the active ingredient of an orally available anticoagulant that is commercially marketed as Xarelto and is used in the prevention and treatment of arterial or venous thromboembolic disorders. In its effect, rivaroxaban is characterized by direct selective inhibition of the FXa coagulation enzyme (Drugs of the Future 2006, 31(6): 484-493).
H2

For the preparation of rivaroxaban several key structures, referred to as building blocks, can be used as advanced intermediates. Virtually all the so far described syntheses are using two such building blocks. The first one are derivatives of 4-(4-aminophenyl)morpholin-3-one, where it may be the case of an unsubstituted amine (2, G means hydrogen), or a derivative alkylated on nitrogen, or a carbamate derived from this compound (2, G means an alkyl or COOalkyl group). The other general and commonly used building block for the rivaroxaban molecule are derivatives of 5-chlorothiophene-2-carboxylic acid (3, X means -OH), or its functional derivatives such as the chloride and amide (3, X means -CI or -NH2). Various synthetic approaches used for synthesis of rivaroxaban differ from each other mainly as regards the chiral building block, which is the source for the construction of the central heterocycle, i.e., 2-oxo-l,3-oxazolidine, wherein the chirality centre is also located. For pharmaceutical purposes one optical isomer derived from rivaroxaban is only used, in particular the target molecule with the absolute configuration (5)-. The selection of a suitable chiral building block must be subjected to this fact. 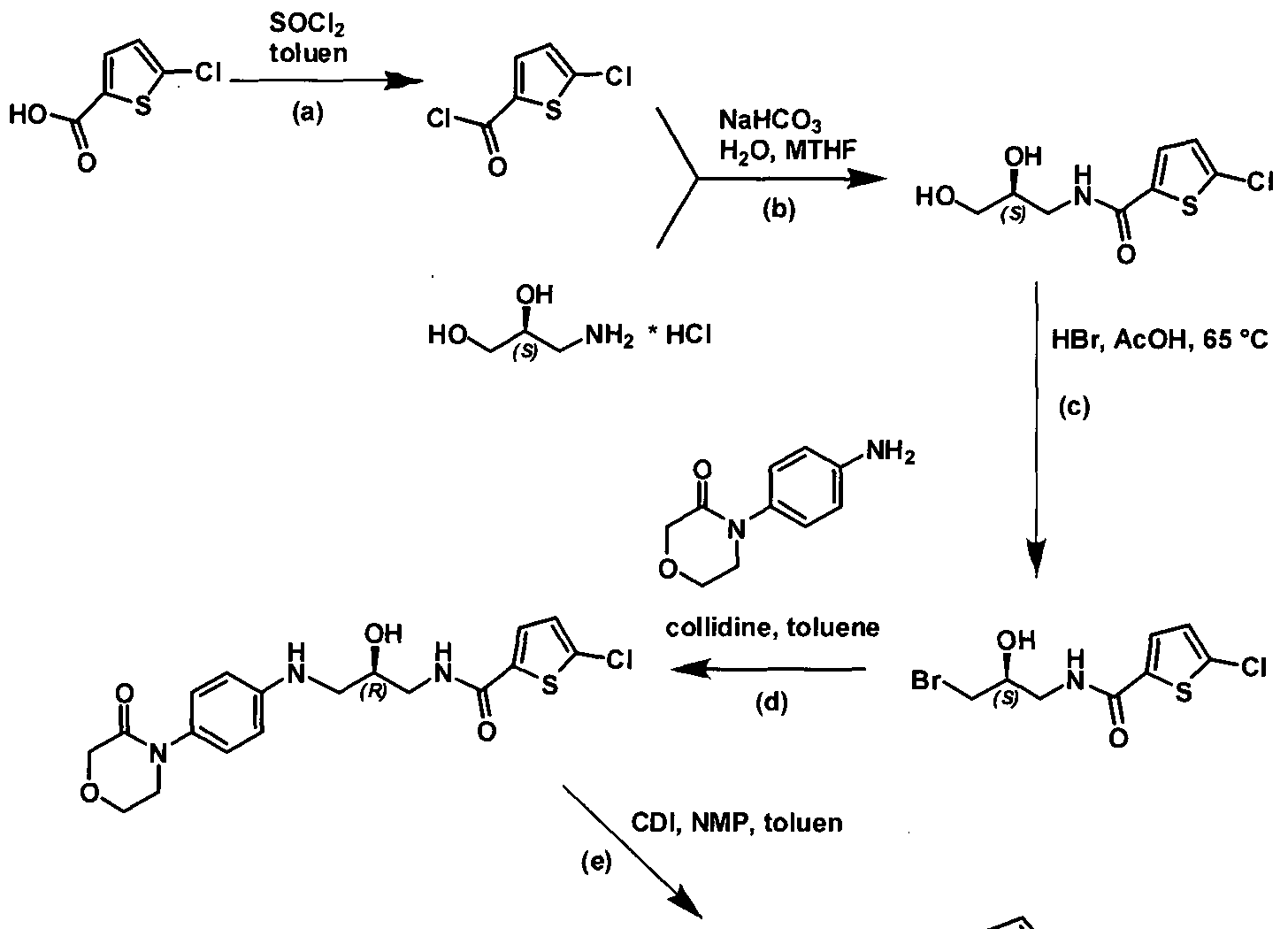 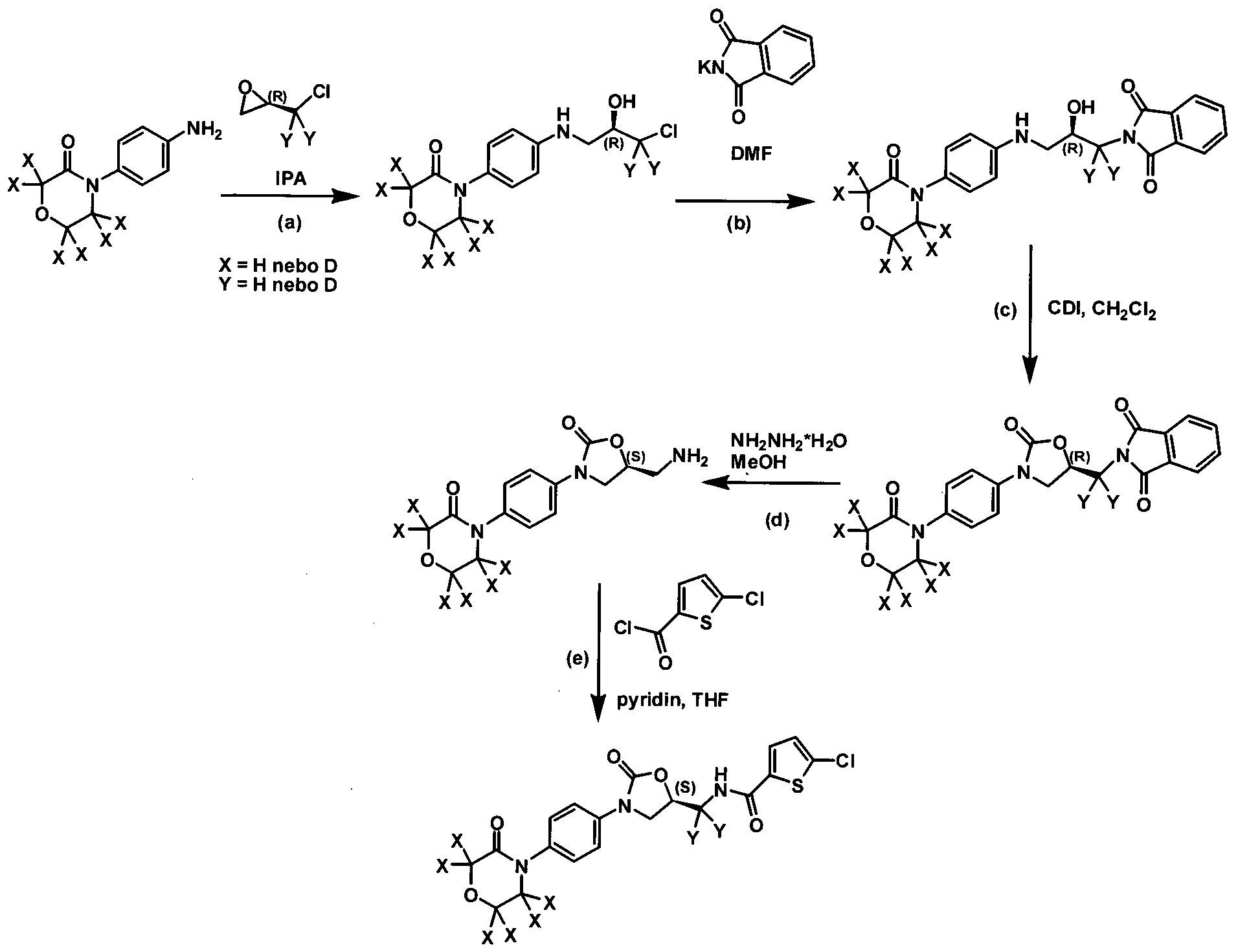 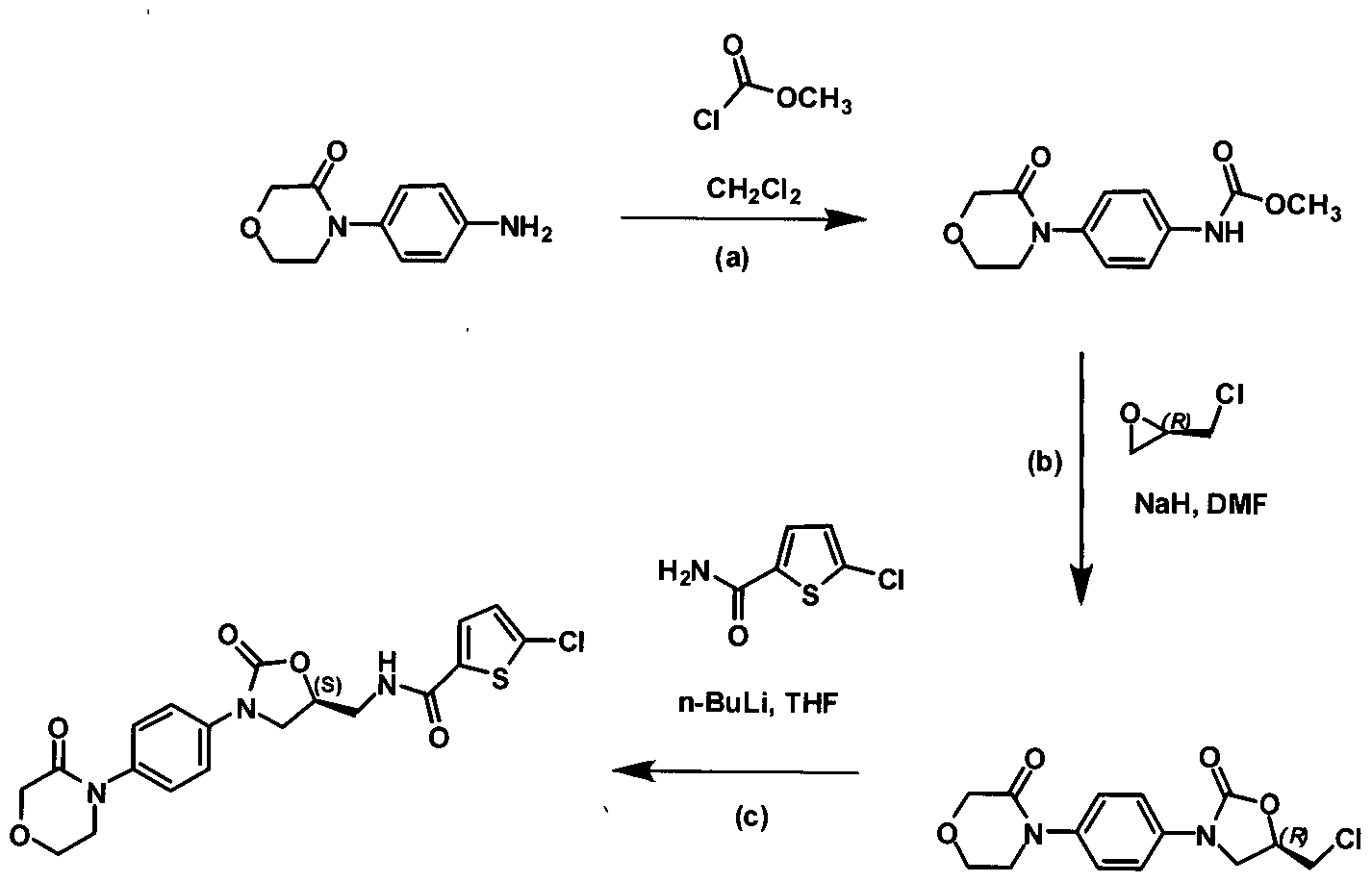 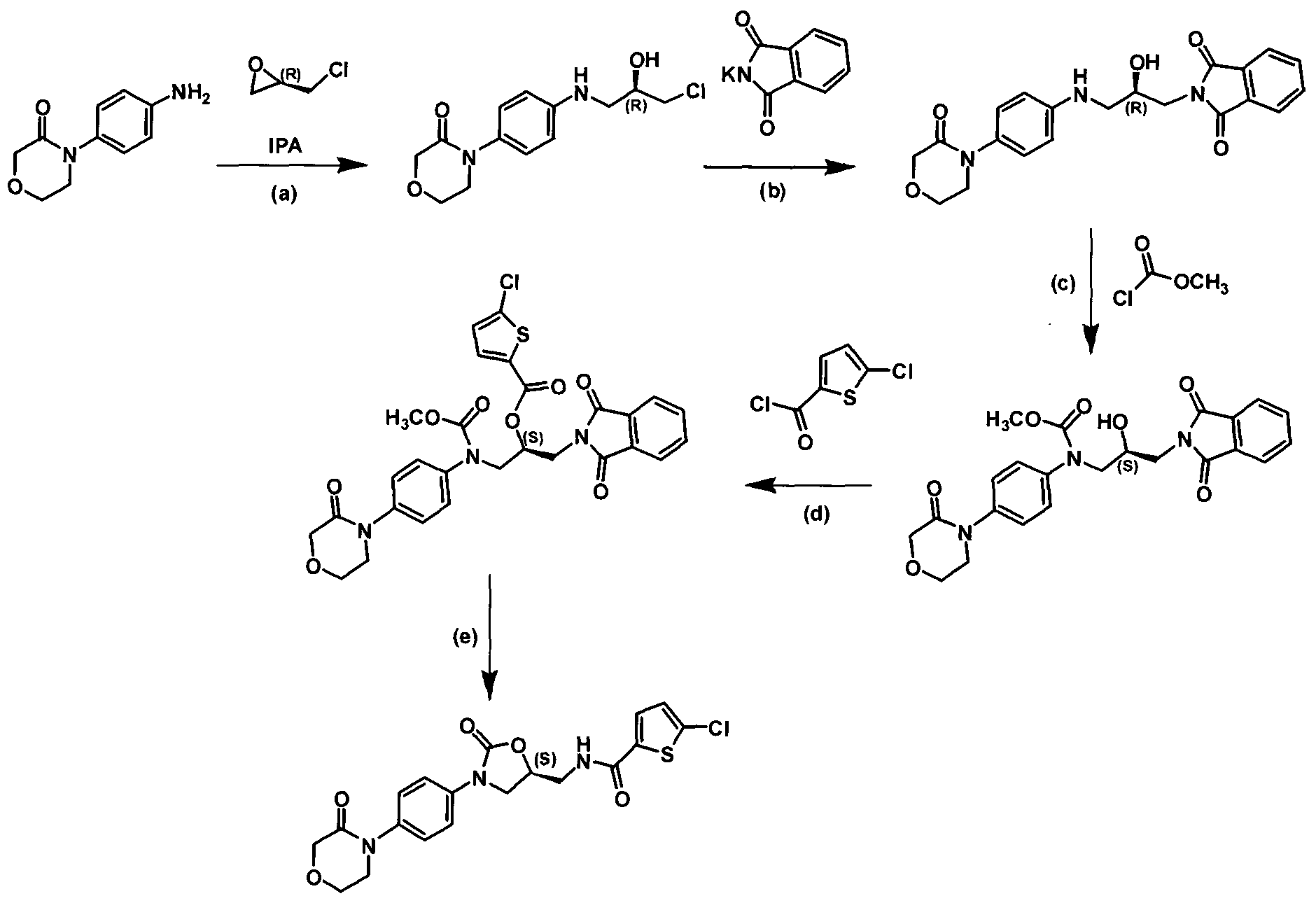 Scheme 5
The sixths synthetic process, which proceeds according to Scheme 6 (WO 2011/080341 Al), uses (7?)-glycidyl butyrate (7) as the chiral building block, which in the key stage reacts with the alkyl carbamate derived from 4-(4-aminophenyl)morpholin-3-one. The last, seventh synthetic process leading to rivaroxaban proceeds according to Scheme 7 (WO 201 1/098501 Al) and, like process 2, uses (S)-3-aminopropane-l,2-diol (5) as the chiral building block. The differences between the second and seventh processes consist in the preparation process of the 2-oxo-l,3-oxazolidine cycle and the carbonylation agent used. While the second process uses Ι,Γ-carbonyldiimidazol (CDI) as the carbonylation agent, the fifth process uses the cheaper, but very toxic phosgene. 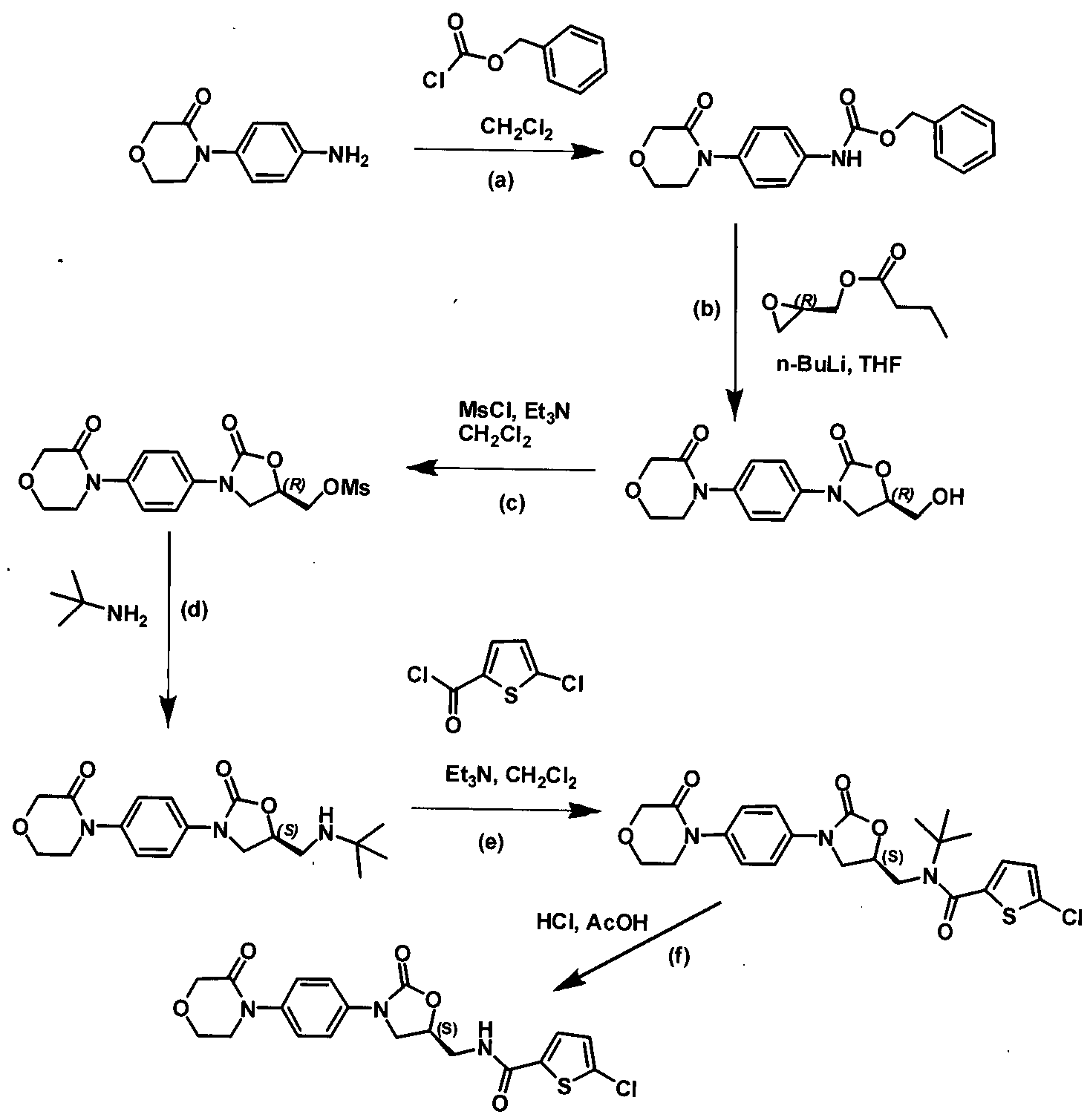 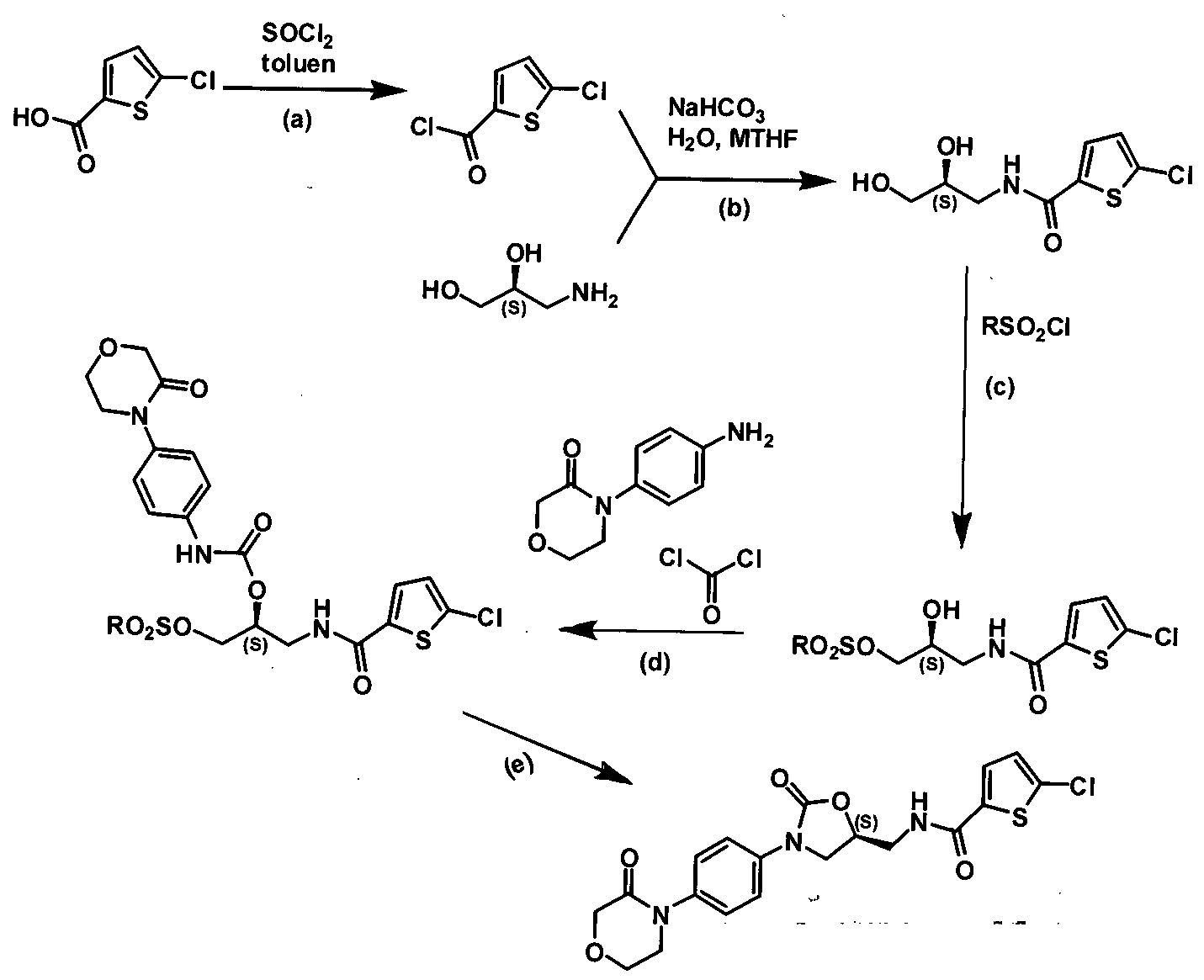 Scheme 7 The processes used for the synthesis of rivaroxaban differ from each other especially in the chiral building block (compounds 4 to 7) and in the carbonylation agents (CDI, alkyl chloroformates, phosgene) used. Another difference can be found in the method of performing deprotection reactions, i.e. such reactions that lead to elimination of the protecting groups, initially bound to the nitrogen atom of the advanced intermediates and which had the initial purpose of protecting these intermediates from undesired chemical transformations. No deprotection reactions were necessary in the case of the processes according to Schemes 2, 4 and 7, as the protecting groups bound to the nitrogen atom eventually became part of the final product. In the case of process 6 it was necessary to deprotect the fert-butyl group bound to the nitrogen. The reaction used was an acid catalyzed reaction of the tert-butyl group, releasing isobutylene according to Scheme 8. In normal conditions isobutylene is a gas and thus can be very easily separated from the final product.

US 07/149522 discloses ー kind to 5_ chlorothiophenes _2_ carbonyl chloride (IV) is a method for preparing raw rivaroxaban in:

...........................
5- chloro-thiophene-2-chloride by condensation, oxidation, and 4- (4-amino-phenyl) -3-morpholinone cyclization reaction racemic rivaroxaban, since the epoxidation step is not give any stereoselectivity, the final chiral separation need to get rivaroxaban, the reaction scheme is as follows :( References: W0-0147919)

4- (4- amino-phenyl) -3-morpholinone by condensation, cyclization, and potassium phthalimide after reaction with methyl chloroformate to give (S) -2 - hydroxy -3- (I, 3- dioxo - isoindoline-2-yl) propyl-4- (3-oxo --morpholino) phenyl carbamate, by condensation, methylamine and Ethanol action under profit rivaroxaban, the following reaction scheme (Ref: US20110034465):

4- (4- amino-phenyl) -3-morpholinone after condensation with (R) - epichlorohydrin, then the 5-chloro-thiophene-2-amide lithium chloride and tert-butyl the reaction of an alcohol potassium enrichment rivaroxaban, the following reaction scheme (Ref: US7816355):

[0078] The compound 5_ gas - oh -I- thiophene carboxylic acid (500mg, 3. 08mmol), MsCl (702mg, 6. 1 Bmmol) and sodium bicarbonate (. 517mg, 6 16mmol) was suspended in THF (20ml) in , heated to 60 ° C with stirring 45min, a large white suspension washed out; the reaction mixture was cooled to room temperature, the compound of formula VIII was added portionwise (800mg, 2 75mmol.), stirred for 5 hours, after completion of the reaction distilled THF, was added after the residue was cooled to room temperature, water (IOOml), at room temperature embrace Cheung 30min, filtered, and the filter cake washed with cold water, dried and added to a ko-ol (5ml) was heated at reflux for I hour. After cooling, stirred for 5 hours at room temperature After filtration to give the product of formula (X) of the compound rivaroxaban (719mg, 60%) 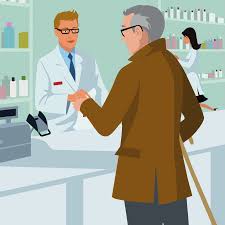 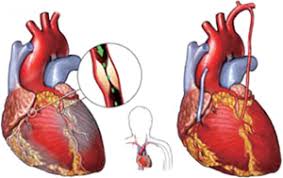 https://plus.google.com/.../posts/g4TXSPBA4YV
ANTHONY MELVIN CRASTO
1 hour ago - WO 2015104605.new patent on Rivaroxaban, Wockhardt Ltd Process for preparing rivaroxaban - comprising the reaction of a thioester compound and its salts ...

Rivaroxaban, a FXa inhibitor, is the active ingredient in XARELTO Tablets with the chemical name 5-Chloro-N-({(5S)-2-oxo-3-[4-(3-oxo-4-morpholinyl)phenyl]-1,3-oxazolidin-5­yl}methyl)-2-thiophenecarboxamide. The molecular formula of rivaroxaban is C19H18ClN3O5S and the molecular weight is 435.89. The structural formula is:
Rivaroxaban is a pure (S)-enantiomer. It is an odorless, non-hygroscopic, white to yellowish powder. Rivaroxaban is only slightly soluble in organic solvents (e.g., acetone, polyethylene glycol 400) and is practically insoluble in water and aqueous media.
Each XARELTO tablet contains 10 mg, 15 mg, or 20 mg of rivaroxaban. The inactive ingredients of XARELTO are: croscarmellose sodium, hypromellose, lactose monohydrate, magnesium stearate, microcrystalline cellulose, and sodium lauryl sulfate. Additionally, the proprietary film coating mixture used for XARELTO 10 mg tablets is Opadry® Pink and for XARELTO 15 mg tablets is Opadry® Red, both containing ferric oxide red, hypromellose, polyethylene glycol 3350, and titanium dioxide, and for XARELTO 20 mg tablets is Opadry® II Dark Red, containing ferric oxide red, polyethylene glycol 3350, polyvinyl alcohol (partially hydrolyzed), talc, and titanium dioxide. 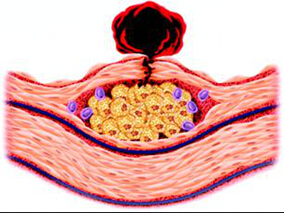