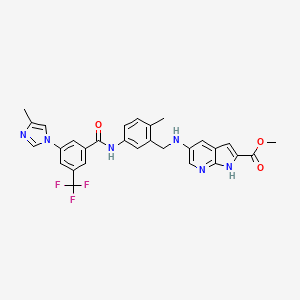 Efforts were made to improve a series of potent dual ABL/SRC inhibitors based on a 7-azaindole core with the aim of developing compounds that demonstrate a wider activity on selected oncogenic kinases. Multi-targeted kinase inhibitors (MTKIs) were then derived, focusing on kinases involved in both angiogenesis and tumorigenesis processes. Antiproliferative activity studies using different cellular models led to the discovery of a lead candidate (6z) that combined both antiangiogenic and antitumoral effects. The activity of 6z was assessed against a panel of kinases and cell lines including solid cancers and leukemia cell models to explore its potential therapeutic applications. With its potency and selectivity for oncogenic kinases, 6z was revealed to be a focused MTKI that should have a bright future in fighting a wide range of cancers.