Synonym: GPE, Glycyl-prolyl-glutamic acid, (1-3)IGF-1
Pfizer (Originator)
Neuren Pharmaceuticals (Originator)
Glypromate; glycine-proline-glutamate (neuroprotectant), Neuren
Gly-Pro-Glu is a neuroprotective compound and the N-terminal tripeptide of IGF-1. Gly-Pro-Glu is neuroprotective after central administration in animal models of neurodegenerative processes, such as Huntington’s, Parkinson’s, Alzheimer’s diseases, and varies acute brain injury animal models. The neuroprotective activity is not related to its affinity to glutamate receptor. Findings indicate that GPE mimics insulin-like growth factor I effects on the somatostatin system through a mechanism independent of β-amyloid clearance that involves modulation of calcium and glycogen synthase kinase 3β signaling.
GPE is a naturally occurring peptide fragment which had been in phase III clinical trials at Neuren Pharmaceuticals for use as prophylactic neuroprotection for patients undergoing coronary artery bypass graft (CABG) and valvuloplasty surgery. Although clinical evaluation in Australia continues, phase III trials evaluating the compound in the U.S. were discontinued based on negative results. The compound is found in normal brain tissue and, when injected intravenously, has been shown to act by multiple pathways to protect brain tissue from injury. The drug was originally developed by Pfizer, but rights were transferred to Neuren pursuant to a proprietary agreement between the companies.

When amino acids join together (forming short groups called polypeptides, or much longer chains called proteins) the amine group of one amino acid joins with the carboxyl group of the next, making a peptide bond. These bonds don’t ionise at different pHs, but can be hydrolised — broken — reforming the amino acids. GPE is formed from the amino acids glycine, proline and glutamic acid:

This tripeptide has 3 pH-sensitive groups, each with its own pKa. What the university chemists needed to do was work out what form GPE is in when it is active in the brain, what parts of the molecule are critical to its effectiveness, and how to ‘tweak’ the molecule (by changing the side chains) so that it will remain in the brain for longer than the naturally-occurring substance.   They also needed to make sure the final compound passes through the blood-brain barrier (that prevents most substances in the blood from entering and affecting the brain). If possible, they also wanted a compound that could be taken in pill form without being broken down in the stomach. It was also essential that the compound was safe for people to take!
Neuren Pharmaceuticals
After initial work on GPE at the university, the research was passed to a spin-off research group called Neuren Pharmaceuticals Ltd, which takes compounds discovered by the University of Auckland and develops them into medicines. Neuren developed GPE intoGlypromate® and are working with researchers in the US (including the US Military, who have a keen interest in a medicine that will reduce brain damage after head injuries) to test the compound on patients. There is considerable interest in Glypromate® world-wide, because at present there is nothing that reduces cell death after brain injuries. The chances of winning a race are pretty high when you’re the only competitor!Glypromate® is being tested on heart-bypass patients because up to 70% of bypass patients are affected mentally after their surgery. It’s thought that tiny clots form after the heart is restarted, and that these travel to the brain and cause mini-strokes. Unlike naturally-occurring strokes, or the brain damage caused by accident or war, the bypass surgery is planned, so before and after tests can be done on the patients to see exactly what effect the treatment has. Early results look very promising.
Glypromate is just one of the compounds Neuren is working on. Others may develop into treatments for Multiple Sclerosis, Parkinson’s Disease or Alzheimer’s Disease as well as various kinds of cancer. The company’s links with overseas research groups mean that compounds developed in New Zealand are able to be tested in the US and gain the FDA approval which will allow them to be used in most countries in the world.
The tripeptide Glycyl-L-Prolyl-L-Glutamate (Gly-Pro-Glu or GPE) is a naturally occurring peptide, which is proteolytically cleaved from insulin-like growth factor-1 (IGF-1). IGF-1 is a potent neurotrophic factor produced endogenously in damaged regions of the brain. It has been postulated that some of the neuroprotective actions of IGF-1 are mediated by GPE although the precise mechanism of action remains unclear. GPE has a different mode of action to IGF-1 as GPE does not bind to the IGF-1 receptor. Rather, GPE has been shown to bind with low affinity to the N-methyl-D-aspartate (NMDA) receptor and also elicit a biological response via other mechanisms. GPE facilitates the release of dopamine through interaction with the NMDA receptor but GPE stimulated acetylcholine release is via an unknown, non-NMDA pathway.
It has been demonstrated that GPE can act as a neuronal rescue agent following brain injury or disease, including hypoxic-ischemic brain injury, NMDA challenge, chemical toxins and in animal models of Parkinson's and Alzheimer's disease. Analogs of GPE are thus of interest in the development of novel pharmaceutical agents for the treatment of central nervous system (CNS) injuries and neurodegenerative disorders among others.
CURRENT STATUS

Neuren Pharmaceuticals was developing Glypromate (glycine-proline glutamate), a naturally occurring small-molecule neuroprotectant derived from IGF-1 which inhibits caspase III dependent apoptosis, for the potential treatment of neurodegenerative diseases by iv infusion. By June 2008, a phase III trial had begun . However, in December 2008, the company discontinued further development of the drug after it failed to show an observable effect [972907]. In November 2005, the company was seeking to outlicense the drug [771417].
Neuren is also investigating the Glypromate analog, NNZ-2566 for similar indications. 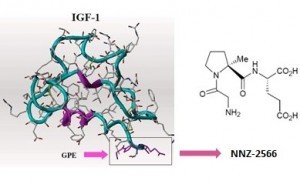 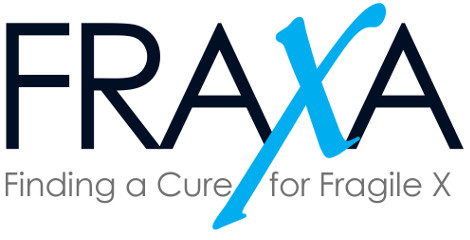 This isn’t a Fragile X trial, but the Neuren compound, NNZ-2566, that is in trials now for Fragile X has shown significant positive effects in a Phase 2 trial for Rett syndrome.
The results of the trial are interesting, in that improvement was seen a Rett syndrome-specific rating scale compared to placebo, and there was also improvement noted on the CGI-I (Clinical Global Impression of Improvement) and Caregiver Top 3 Concerns. However, there was no effect seen on ABC scores (Aberrant Behavior Checklist) compared to placebo. Many in the Fragile X field have noted the inadequacies of the ABC; indeed, it was never designed or intended to be an outcome measure for clinical trials. In this case, a Rett-specific rating scale called the Motor-Behavior Assessment (MBA) showed a statistically significant and clinically meaningful treatment effect at the highest dose of the Neuren compound compared to placebo.
This is great news for those of us in the Fragile X community for several reasons:
–
This last point is strongly reminiscent of the experience of many families and clinicians in recent Fragile X clinical trials, where the drugs showed no advantage compared to placebo based on rating scales, but genuine improvement was noted in many subjects, with significant deterioration upon discontinuation of the drugs. Thus the calls for improved rating scales which can “capture” these core, disease-specific therapeutic effects. The NeurenFragile X trial is using some Fragile X-specific outcome measures which will hopefully lead to similar positive results.
The fact that this result is good news for Neuren also means that the company should remain financially viable for longer, so that they can continue the development of this compound for a number of indications—more “shots on goal”.
Of course, the usual caveats apply: this was a small study, and these results need to be replicated in a larger Phase 3 trial. Still, there’s a realistic possibility that we may see a similar result in Fragile X!
Posted by DRUG PATENTS INTERNATIONAL at 06:00 1 comment: